What exactly is LiFi?

Discover what LiFi is, how it works, and how it can make your life easier.

WiFi runs our life. In fact, according to a survey carried out by Direct Line by Opinium Research online, it is the number one thing that their respondents couldn’t live without. But no matter where you are in the world, you’ve probably experienced internet connectivity problems at one point or another.

Enter LiFi, a type of wireless connection that can be up to 100 times faster than WiFi.

Imagine a world where you can connect to high-speed internet by just flicking on your light switch. LiFi is a wireless optical networking technology that uses LEDs for data transmission. In simpler terms, LiFi is considered to be a light-based WiFi that uses light instead of radio waves to transmit information. Using light to transmit data allows LiFi to deliver a couple of advantages such as working in areas susceptible to electromagnetic interference like hospitals and aircraft cabins and working across higher bandwidth while offering higher transmission speeds.

The LiFi technology is currently being developed by numerous organizations around the world.

How does LiFi work?

LiFi is a Visible Light Communications system transmitting wireless internet communications at very high speeds. The technology makes a LED light bulb emit pulses of light that are undetectable to the human eye and within those emitted pulses, data can travel to and from receivers. Then, the receivers collect information and interpret the transmitted data. This is conceptually similar to decoding Morse code but at a much faster rate – millions of times a second. LiFi transmission speeds can go over 100 Gbps, 14 times faster than WiGig, also known as the world’s fastest WiFi.

Whereas WiFi technology effects data transfer on radio waves, LiFi takes the next revolutionary step in wireless evolution and embeds and transfers data in visible light beams, thereby allowing LiFi to take full advantage of the vastly greater light spectrum bandwidth capacity that is provided by the light spectrum.
p

How it works exactly

Data is captured in modulated light frequencies of a solid-sate LED light source and is then transmitted and received by LiFi-enabled devices. A photosensitive detector demodulates the light frequency signal and converts it back into an electronic data stream and – in so doing – allows for faster-than-ever, more secure, bi-directional wireless communication. 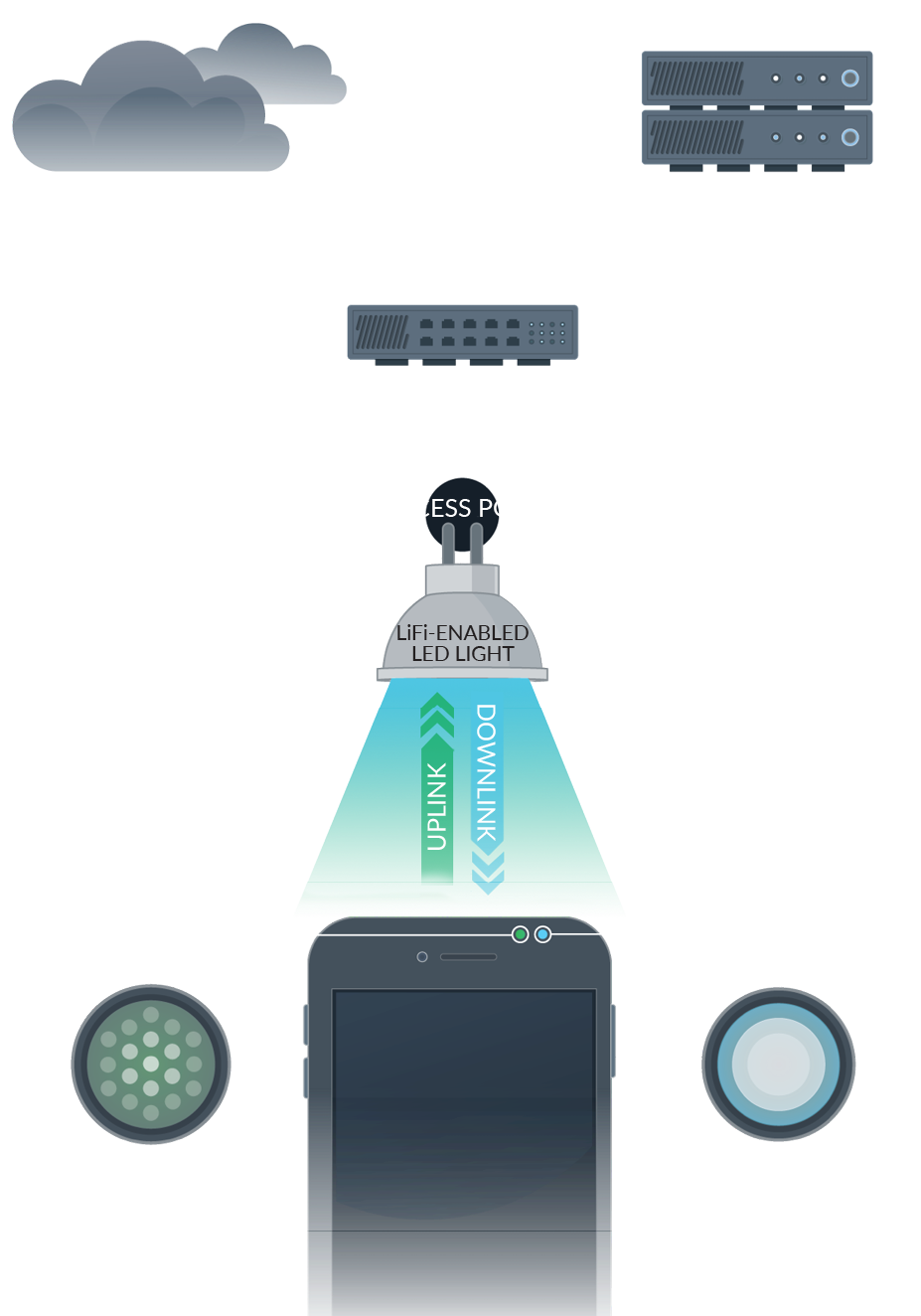 WiFi: Used for internet browsing with the help of WiFi hotspots

WiFi: Several sources of radio interference can disrupt the function of a WiFi network
LiFi: Does not have any interference issues similar to radio frequency waves.

WiFi: WiFi is less secure because the signal cannot be blocked by walls and most objects
LiFi: With LiFi, light is blocked by the walls and hence will provide more secure data transfer

Looking at the data above, the biggest disadvantage of LiFi technology is its coverage distance. Since light can’t pass through walls, the signal’s range is limited by physical barriers.

LiFi is probably not the replacement of WiFi technology anytime soon. Instead, it is an incredible companion for it. By positioning LiFi as a complementary technology to WiFi, this promising technology will take wireless connectivity to new heights.

What does LiFi mean for everyone?

Using LiFi is really not that different from using WiFi; except that it would be very fast.

At a city scale, street lamps could provide data to pedestrians, vehicles, and all sorts of infrastructure components that might be in need of data. Although the technology is only being utilized in industrial applications, it will soon make its way into smart homes. It is predicted that future home and building automation will be reliant on LiFi for being fast and secure.

Why is LiFi important?

Consumption of wireless data increases by 60% every year. That means that the radio-frequency space is slowly becoming saturated which can lead to a phenomenon called a spectrum crunch. Spectrum crunch refers to the potential lack of sufficient wireless frequency spectrum needed to support a growing number of consumer devices, along with various government and private sector uses of radio frequencies within a broad spectrum allocated for different types of wireless communications. This poses challenges with wireless networks because it would negatively affect the speed of our internet usage.

Eventually, WiFi will not be able to keep up with the demand for data.

A Brief History of LiFi

Professor Harald Haas, Chair of Mobile Communications at the University of Edinburgh is considered to be the founder of the LiFi technology. He coined the term LiFi which stands for light fidelity when he promoted this technology in his 2011 TED Global talk and helped start a company to market it. According to this TED talk, light fidelity can be applied in traffic control systems using a car’s headlights or in chemical manufacturing plants where radio frequency is too dangerous and could cause antenna sparks. LiFi will bring internet access to places that RF’s cannot reach!

The company Haas co-founded is called pureLiFi, formerly pureVLC is an equipment manufacturer firm set up to commercialize LiFi products for integration with existing LED-lighting systems.

In September 2013, the company released the world’s first commercially available LiFi technology. The Li-1st marked the introduction of groundbreaking wireless communication technology and became the world’s first LiFi technology available on the market. Li-Flame which was released in February 2015, claimed to be the first LiFi product that allowed for mobile wireless communications. A year later, pureLiFi and Lucibel, a French lighting company, launched the world’s first industrialized LiFi solution, having been deployed in multiple locations including Microsoft’s Paris HQ.

Chief Innovation Officer at Lucibel, Edouard Lebrun speaks to the benefits of this partnership.

“This was a major breakthrough achieved with pureLiFi enabling the Lucibel Group to become the link between the world of lighting and the one of IT. This industrialized solution was the first solution on the market that was easily integradable into a building, and formed parts of Lucibel industrial strategy implemented over two years by having relocated its manufacturing facility in France.”

In October 2017, the LiFi-XC system was released. This device is a certified plug and play system that works with USB devices and is small enough to be integrated into your next laptop, tablet or smart appliance. And just this June, pureLiFi offered LiFi starter kits to academic researchers and also opened a channel program for IT resellers to add LiFi to their portfolio.

The speed of LiFi technology not only lies on its speed. It will save costs in homes and workplaces because it could do without electronic devices such as routers, modems, signal repeaters, wave ampLiFiers, and antennas. Currently, these devices are connected to power 24/7. Since LiFi is connected to LED bulbs, using the technology would not be an extra cost.

Also in the near future, it has been estimated that we will be able to transmit data through solar energy. That means the people without internet access or with limited electricity resources will now be able to connect to the web wirelessly.

How close are we to using LiFi?

It’s been predicted that LiFi would be released to the general public in early 2022.

A grocery store in France is currently using LiFi to track the locations of their customers throughout the store and is then able to offer coupons and incentives. Large mobile companies, such as Apple, are also starting to suggest that their future devices will be LiFi capable.

pureLiFi is currently working with partners across many industries including defense, healthcare, lighting, IT infrastructure, telcos, and device integrators. The company is also dedicating a lot of resources to research for product development and commercialization.

The future of LiFi

Right now, LiFi cannot fully replace WiFi as a connectivity source, however, there are several LiFi companies that are working hard on developing LiFi products and marketing LiFi as the primary wireless technology. The demand for fast internet access is increasing every day and light fidelity could be the technology to meet this demand.

LiFi is considered to be the future of the internet. That future is looking bright and we are all looking forward to it.